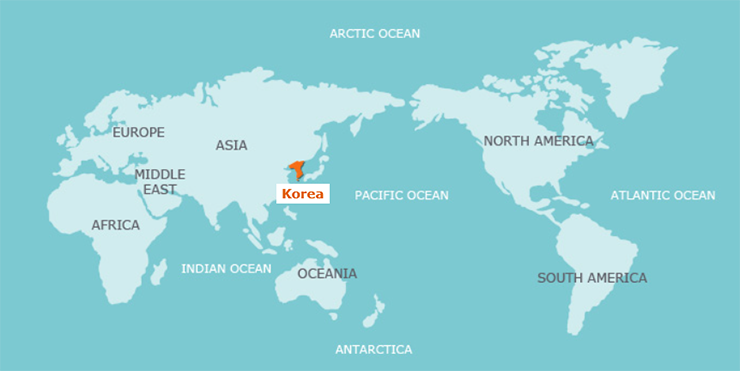 Korea, the Land of Morning Calm, is a truly remarkable place. There are so many things to see and do in Korea that you are sure to find an attraction that is the perfect match for your requirements. Korea’s rugged mountainous terrain and hundreds of miles of coastline provide unlimited scenic beauty and opportunities for outdoor activities throughout the year. But scenic wonders are not the only attraction of Korea. Evidence of Korea’s unique 5,000-year-old history and culture can be found everywhere.

The Korean peninsula is located in Northeast Asia. It is surrounded by the ocean on three sides, giving Korea its unique geographical feature. With Seoul as its capital city, the mainland is roughly 1,030 km long and 175 km wide at its narrowest point. Korea’s total land area is 100,033 ㎢, neighboring Japan to the east, China to the west, and sharing the northern border with Democratic People’s Republic of Korea (North Korea).

Daegu is the birthplace of traditional Korean culture, whose origins go back millennia. The city’s historical significance has received international attention from UNESCO, which has designated quite a few World Culture Heritage Sites in Korea. Not only did Korean Buddhism and Confucianism originate here, but the region’s quintessential Asian qualities have enthralled numerous visitors. Participants will have the chance to explore the essence of traditional Korean culture. 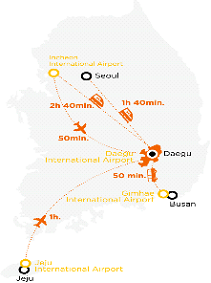 Daegu is located in south-eastern Korea about 80 km (50 min.) from the seacoast.

Korea’s currency unit is won which comes in 1,000, 5,000, 10,000 and 50,000 Won bills, and 10, 50, 100 and 500 Won coins. Generally, banks are open between 09:30-16:30 Monday to Friday. Automated teller machines are in operation 24 hours a day. Most larger stores, hotels and restaurants in Korea will accept major international credit cards. However, it is advisable to carry some cash, since many smaller establishments and stores are unlikely to accept any credit cards.

Tipping is usually not customized in Korea, but it is appropriate for the excellent service. In major tourist hotels, 10% VAT and 10% service charge is added to the bills for rooms, meals and other services.

We have a very beautiful summer in Daegu. Average temperature of August in Daegu is 31ºC (87.8ºF).

Korea uses 220 volts, 60 cycles system. Regarding the shape of outlet, Korea use ‘Round pin attachment plug’ type. Please check up your plug and prepare the adapter, if necessary.

In relation to Greenwich Mean Time, Korea is +9 hours.

To make an international call, first dial the international dialing code (001, 002 or 00700), then the country code, area code, and finally the individual number. You may rent a cell phone at the airport.